Keys – One question for me regarding upkeep and maintenance of the Groudle Glen Waterwheel and whether DEFA are responsible for its repair and upkeep. At present advice indicates that we are not, but I indicated that the department is willing to enter into negotiations with Onchan Commissioners who are the freeholders to secure its future.
There were seven other questions for oral answer and three questions for written reply.
Two bills for first reading Bill of Exchange (Amendment) Bill 2016, Treasure Bill 2016  and the final item was the second reading of the Equality Bill 2016. It was pointed out that this originally started its passage in 2011 and is a piece of legislation that will bring us into line with the excepted rules in the UK and other jurisdictions. It was ably proposed by my colleague Minister Chris Thomas and passed unanimously despite an attempt to refer the same to committee.
The order paper was proceeded by an emergency motion by Mr Robertshaw concerning the Vision 9 position but this motion was defeated.
Afternoon – back to DEFA for further department business. 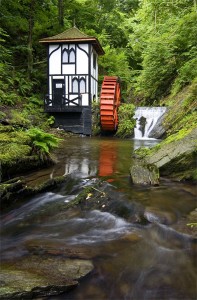 Groudle Glen Waterwheel in its heyday