I live with my wife Suzie on Ballagarraghyn Farm, St. Johns. I am currently Chief Executive of a Manx-based investment company with a UK subsidiary. We have four children aged between 28 and 33. Clair, our eldest daughter and her sister Sara both live and work in Australia. Sara is married and with her husband Carl have two young children. Tabitha lives and works in the UK for a subsidiary of our Manx company, she is married to Ross and they have two young daughters. 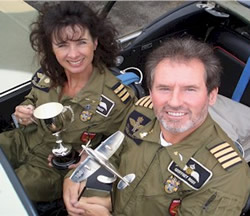 Barnaby also lives and works in the UK.

As a family we feel privileged in as much that two of our parents (grandparents of the children) are still alive in their 90s, providing a valuable rock and occasional reality check for the whole family.

Geoffrey’s Life
I was born in 1953 and attended a number of schools in the UK following my father’s career moves. I left school with some 16 GCEs (as they were in those days). My further education was cut short when a passionate interest in motorcycles/motorcycle racing resulted in a serious accident and several months of hospitalisation, recuperation and three months of being unable to walk a very humbling experience and one which has left its mark when dealing with people with disabilities and the problems it creates.

At college my intended career option was bio-chemistry and physics but the unfortunate accident resulted in a complete career change, with the first few years of my working life spent with the then Midland Bank.

This proved an excellent insight into the world of finance and a sound footing for moving into surveying, auctioneering and estate agency work, where I became a partner for one of the larger firms of estate agents and surveyors in the UK.Parallel to this I was developing farming interests and operated a substantial soft fruit farm with later diversification into holiday, leisure and golf course development. A company sale in the 1980s enabled an even broader diversification of career into several parallel strands, which still included farming and leisure but now included aviation, property investment and development and a burning passion for politics.

As Chief Executive of a Manx-based company I moved to the Island permanently in the late 1980s.

Our family coat of arms (pictured above) includes the words tenacity and perseverance and that perhaps sums up my approach to life and challenges.