https://www.gov.im/news/2016/dec/16/health-and-lifestyle-survey-opens-to-public/
Early Start – DEFA for Fisheries meeting to assess the King Scallop situation as we are nearing the end of the temporary bag limit.
Later morning – Agriculture Committee meeting progress report on various things including the Meat Plant and Isle of Man Creameries and update generally.
Lunchtime – Meeting in the acting Attorney General’s Office seeking legal advice on various government matters relating to DEFA.
Afternoon – Meeting with all members to discuss and put in further work in programme for government. This seems to be evolving well and progress will be  taken to Tynwald in January.
Later afternoon – Back to DEFA for planning appeal decisions to be made.
I guess Christmas starts here. The Christmas tree in DEFAs reception area certainly sets the scene.
Early evening – Wonderful nativity/carol service by St Johns School children in the Royal Chapel. 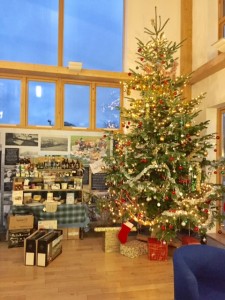 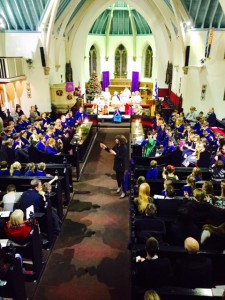 Tynwald Court
An early start for me with a meeting at home with my CEO from DEFA for a catch up and briefing.
There were 18 items on the order paper with 12 questions for oral answer and 9 for written answer. Only one for me in the oral section from Mr Ashford MHK enquiring what enforcement action is taken where an applicant fails to display Form 1 yellow site form as required and for the specified period (a planning application). I was able to reassure that in the event of the yellow form not being displayed correctly then a planning application is reset and started all over again, which can lead to considerable delay and if discovered after the event this can result in legal action and the decision being quashed.
I was also able to undertake to review the same and in the future as we start an overhaul of the planning system.
The sewage rate increase was agreed after much debate and will be levied at 98p which will result in an average rise of between £8 – £10 per year. Whilst no one welcomes increases I was surprised at the length of debate considering some of the real financial issues that have yet to be addressed.
My colleague Minister Harmer was able to get two Key motions with regard to Strategic Sea Services and their provision passed, which will hopefully move this matter on. I was pleased to see the transparency that DOI have applied to this with release of two substantial reports by third parties.
A motion allowing the Cabinet Office to undertake work in connection with a single resident record was passed this doesn’t mean it will be introduced, this is feasibility and any proposals will come back to Tynwald.
Perhaps most controversial were the Douglas promenade options all the principles were accepted but there was a split vote between Legislative Council and Keys with regard to the provision of twin tracks between Broadway and Summerhill being renewed in their current location. It would appear the Legislative Council favoured an amendment by Mr Cretney to put the tracks along the side of the road with an inevitable loss of parking.
The debate also reassured members that provision within the base of the new road will allow future proofing if it is felt that the link between the sea terminal and war memorial was required in the future.
We will return for a combined vote in January which will pass by majority when I hope DOI will then be in a position to move things forward at long last.
I was also pleased that all the recommendations in the Social Affairs Policy Review Committee report Children and Family Social Services were passed after a lengthy debate. Having been involved on that committee these services need to improve via evolution rather than revolution and this sets the tone.
The final debate with regard to a sugar tax took far too long, with unrealistic expectations by some members that somehow we could unilaterally introduce a sugar tax in the Isle of Man that would solve all our obesity problems paying little heed to the fact that if sugary drinks went up even 20% it represents a few pence per bottle. Not only that but why would people buy locally if they can get a better deal across without customs barriers, how would we stop this traffic? In the end common sense prevailed and we will align ourselves with any tax moves that come about as a result of UK changes at present in process.
https://www.gov.im/news/2016/dec/12/government-publishes-third-report-on-brexit-implications/

8am meeting Environment and Infrastructure Sub Committee discussing programme for government and priorities.
10am  House of Keys Sitting only one question for me around what action has been taken by environmental health to prevent further deterioration of Castle Mona. I was pleased to be able to report that my department had carried out a detailed inspection on the 11th & 12th October and whilst the building was perhaps not in prime condition it was not at risk and there is a developer interested in the same who is aware of the situation. There were a further 16 oral questions in total with three for written answer.
A radio interview later confirmed the situation to Manx Radio.
The Dogs (Amendment) Bill 2016 for first reading from my department.
We were then able to appoint a new Chaplain Venerable Andrew Brown.
Then followed two Bills for the second reading, Bills for Exchange (Amendment) Bill 2016 and  the Treasury Bill which deals with treasure trove.
Lunchtime presentation on Strategic Sea Services.
Afternoon Policy and Strategy Meeting DEFA, a fairly heavy agenda followed by an all Department meeting.
Supper in Peel at the Boat Yard very festive and ambient, great food and service as always.
Early morning – ceremony to officially mark the IOM Post Office engagement with UNESCO Biosphere and their Christmas themed stamps.
Morning – Queen Scallop Fishery review.
Lunch – with IOM Creameries. A good catch up session with views expressed on both sides with regard to farming and the dairy industries future.
Afternoon – department review for Keys.
Evening – IOM police HQ for Firearms Consultative Committee meeting an overview and consultation with regard to possible regulation changes. 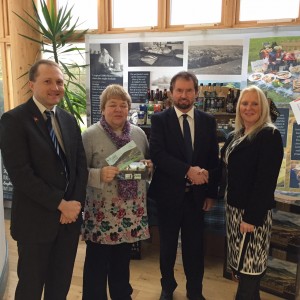 Douglas for the St Barbara’s Day Service to celebrate the Royal Artillery Association Regimental Day at St Thomas Church.
Our normal Peel morning visit coupled with a visit to the food park and informal conversation with one of the leading food processors.