Keys – another short order paper. One question for me regarding the number of prosecutions for littering. As DEFA is not responsible for enforcement I could only quote figures for local authority and police prosecutions.
Lunchtime presentation on the Equality Bill which received it’s first reading in the Keys today.
Afternoon spent at DEFA dealing with a number of items including outstanding planning appeal decisions.
Hosted French party, as always an interesting dialog particularly regarding Bexit.
Council of Ministers meeting with photo call prior. Afternoon Council of Minister Working Group looking at Child Safe Guarding and Protection. An interesting presentation particularly as I was involved in the Social Affairs Policy Review Committee report at present before Tynwald.
DEFA business followed by a short meeting with Foxdale Heritage at 7.30pm. Some actions on me and glad to see the Old Station building preserved with heritage use. A visit twice in one week as I attended the Patrick Commissioners meeting there on Monday evening.
https://www.gov.im/media/1354196/2016-11-01-q3-comin-quarterly-report-public-version.pdf

42 Items on the order paper including three pieces of regulation amendment from my department. Two revolving around Plant Varieties Act 1997 amending the same to bring us in the line with UK EU regulation to allow the export of seeds and plant material on island. Hopefully a market that will develop, particularly as a result of our UNESCO Biosphere designation.

The third an amendment on the Animal Health Act 1996 to improve the process of retrieving dead stock passports.

I was also requested to make a statement to the Court by Mr Crookall MLC on the King Scallop industry and what my department was doing to maximise economic return to the Isle of Man.

The Council of Ministers also brought forward an early review of a programme for government which triggered a fairly lengthy debate, one that hinted at the sentiment that particularly new members felt we were involving them in developing the programme, rather than working in isolation as the Council of Minister, then presenting the same as a fait accompli.

The detailed programme including outcomes will be presented to January Tynwald.

An item on the operation of the jury system resulted in a lengthy debate about a number of the recommendations and as a result recommendation 12, which revolves around jurors being paid by employers was voted down and the result of a split between the Keys and Legislative Council there were 3 other recommendations will return to the December Tynwald for a joint vote.

Fortunately we finished at around 8pm which leaves Wednesday available for some catch up work in the department.

A busy day at DEFA putting the final touches to introducing a bag limit for Kings Scallops which I hope will be well received by the fishing industry.
See https://www.gov.im/news/2016/nov/14/daily-catch-limit-for-king-scallop-fishery/
In the evening attended both a Patrick Commissioners meeting and Peel Commissioners Meeting, consequently a late supper!
A visit to Foxdale to support the shop and garage. We had hoped to have lunch in the Baltic but sadly found it closed as the landlady Judith has gone on holiday.
Afternoon at the Royal Chapel of St John the Baptists and the National War Memorial for the national service of remembrance and rededication, a moving ceremony and well attended. 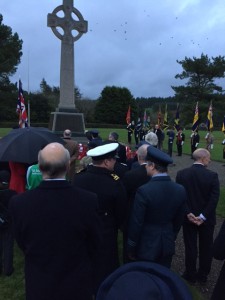 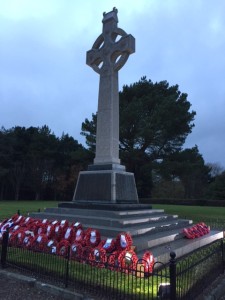 AM – Peel Town Hall with Ray Harmer MHK and Peel Commissioners for a public surgery.
The afternoon saw Suzie and myself at the Manx museum for ‘Celebrating Manx Birds’ organised  by Manx Bird Life and the Manx Ornithological Society. Some interesting presentations particularly relevant as we have seen a marked reduction in Curlews on our farm, alongside an increase in predators both in the air and on the ground.