Final news item before Christmas. The Department of Home Affairs is seeking feedback on the introduction of border identity checks for sea travellers. This is well worth a read for those that travel on the ferry regularly. It will introduce a whole new tier of identification checks. The consultation document does explore the impact. Please find the consultation on https://www.gov.im/ConsultationDetail.gov?id=556
I would also be interested to hear directly from constituents what their views are before I respond to the consultation.
Suzie and I would like to wish everyone a Happy Christmas and we look forward to a healthy and prosperous New Year.
Below is my Winter Newsletter (In Touch Glenfaba) inline with my commitment to stay in touch.
Glenfaba Newsletter
Fuel Prices
Having arrived in London for Christmas the cost of unleaded fuel and diesel compared to the Isle of Man, in some cases its as much as 13p a litre less. I have tried to get to the bottom of this but it still confounds me.
Smoking in Private Vehicles Consultation
Government are consulting on bringing in fixed penalty offence of up to £50 for smoking in private vehicle’s where people of 16 or under are present.
This is out to consultation and here is the link. https://www.gov.im/ConsultationDetail.gov?id=553

Two Tynwald briefings – the first Future of Property Taxation followed on from the recent consultation on property taxes ie rates. It looks as though there is unlikely to be any change this side of the election but there seems to be an appetite for change to make the system fairer and reflect the fact that the last valuation was done in 1969.

This was followed by an update on the New Pension Scheme inline with the commitment that no one will lose out as a result of the changes. 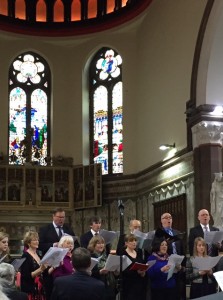 An interesting session, locally a question about progress with Knockaloe where the Minister gave reassurance and I know from my involvement from DEFA that progress is being made in accordance with passed consultation with residents etc. Short term lets will produce income in the meantime while an overall scheme with a search for occupiers is being progressed.

Interesting information with regard to our ongoing structural deficit which in March 2011 was 182 million and March this year 110 million. It seems there is still much to be done in either reducing costs to increasing tax revenues.

Public Sector Salaries continue to rise with over 813 people earning over £50,000 year and 15 more earning over £200,000. However, drilling down on the figures it appears that the higher earners are mainly Senior Health Staff where we have to compete in a global market.

We reviewed The Strategic Plan for Mental Health, a great step forward. It would seem at long last to be recognising that its not just physical ailments that cause serious problems in peoples lives. The plan should result in more workers at the coalface rather than senior staff and may even enable the repatriation of some people who are currently in care across which will result in better access for relatives and may even save money.

The Planning Department is going to be moved from DOI to the Cabinet Office but we are assured this will not result in any extra expenditure.

Not before time the Freedom of Information Act will be phased in affecting the Cabinet Office and DEFA in February this coming year and with a complete roll out which will include local authorities by 2018.

Under the Local Government Act Tynwald has now voted to combine Laxey, Lonan, Maughold into a combined Parish District of Garff. There has been calls for compulsory local authority amalgamations for some time but this has come about voluntarily as a result of shared services and economies of scale. There was feeling in Tynwald that this was sensible evolution and better voluntary model for amalgamations rather than compulsion, it will be interesting to see whether other smaller local authorities in due course follow.

If you are interested please see the link below.

7th December
Spent the morning taking oral evidence with regard to Social Care Procurement in a public sitting as part of an ongoing investigation by The Social Affairs Policy Review Committee on which I sit.
Lunchtime – very interesting briefing to Tynwald members on long term unemployment where fortunately with our economic recovery but also aided by good intervention by Government there are substantial reductions particularly in long term unemployed and young people.

Busy day at DEFA HQ at St Johns 9.30am start with a variety of subject matter, in particular deciding what the programme will be for the next 9 months with the General Election coming up and what legislation to bring forward.

Mid afternoon saw me at the Communication Commission an introduction to their work and the forthcoming Communication Bill which will bring regulation up to date. 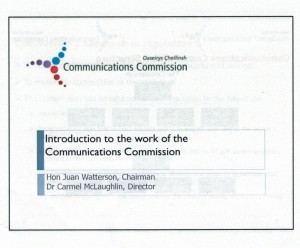 It was interesting to note that we are 7th in the world rating with broadband subscriptions per hundred residents and our broadband speeds are 6th in the world, that of course doesn’t help those particularly in Dalby who are not at present benefiting from the VDSL connections.

Another interesting statistic, we have more mobile phone subscriptions than we have people on the Island. I did raise the question of mobile phone coverage in the Lhagg Road area of Dalby and also broadband speeds.